Oh really? That statement should qualify as the most Ignorant and Hypocritical one in history!

Paul said it right under the direction of the Holy Spirit: Romans 1:22 “Professing themselves to be wise, they became fools, 23 And changed the glory of the uncorruptible God into an image made like to corruptible man, and to birds, and fourfooted beasts, and creeping things. 24 Wherefore God also gave them up to uncleanness through the lusts of their own hearts, to dishonour their own bodies between themselves: 25 Who changed the truth of God into a lie, and worshipped and served the creature more than the Creator, who is blessed for ever. Amen.”

Read the rest of Romans chapter one as it goes on to describe these Ahab’s and Jezebel’s in Hellywood perfectly! 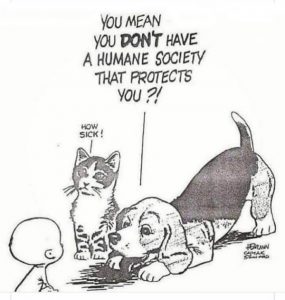 How about all of those babies that are MURDERED, being RIPPED OUT piece by piece out of the Womb? They ” Can’t Stand Up for Themselves” you Hypocrites!! You Ahab’s and Jezebel’s believe that babies are animals so what about those animal rights?

See Babies are not considered to be Human Beings

Breitbart News – Some 25 actors, models, and professional athletes joined forces for a PSA from Mercy For Animals, urging viewers to demand McDonald’s “eliminate the worst cruelty for their chickens.”

In the one-minute ad, titled, “Dear McDonald’s,” the group of activist actors and entertainers scolded the fast food chain for forcing the chickens they use for their products to “sit in waste,” to “live in constant pain,” and a series of other charges.

“Chickens used by McDonald’s are among the most abused animals on the planet,” the group exclaims on its website. “Bred to grow so large so fast, they often can’t walk without pain. Hundreds of brands — including Burger King, Starbucks, Subway, Jack in the Box, and Denny’s — have committed to banning the cruelest practices inflicted on chickens. McDonald’s has not. Let McDonald’s know that animal abuse is bad business.”