This Jezebel will likely be confirmed by the fellow Pedophiles in the Senate!

Updates will be added here as more dirt comes out after she is confirmed, so check back from time to time.

If God does not punish this country for the perversion that is now in the open, He will have to apologize to Sodom and Gomorrah!! 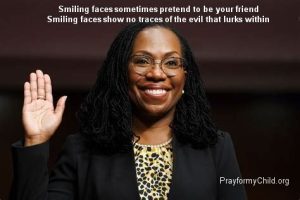 The Sin and Destruction of Sodom and Gomorrah

Genesis chapter 19 records the two angels, disguised as human men, visiting Sodom and Gomorrah. Lot met the angels in the city square and urged them to stay at his house. The angels agreed. The Bible then informs us, “Before they had gone to bed, all the men from every part of the city of Sodom — both young and old — surrounded the house. They called to Lot, ‘Where are the men who came to you tonight? Bring them out to us so that we can have sex with them'” (Genesis 19:4–5). The angels then proceed to blind the men surrounding the house and urge Lot and his family to flee from the cities to escape the wrath that God was about to deliver. Lot and his family flee the city, and then “the LORD rained down burning sulfur on Sodom and Gomorrah — from the LORD out of the heavens. Thus he overthrew those cities and the entire plain, including all those living in the cities…” (Genesis 19:24).

Ezekiel 16:49-50 declares, “Now this was the sin of your sister Sodom: She and her daughters were arrogant, overfed and unconcerned; they did not help the poor and needy. They were haughty and did detestable things before me…” The Hebrew word translated “detestable” refers to something that is morally disgusting and is the exact same word used in Leviticus 18:22 that refers to homosexuality as an “abomination.” Similarly, Jude 7 declares, “…Sodom and Gomorrah and the surrounding towns gave themselves up to sexual immorality and perversion.” So, again, while homosexuality was not the only sin in which the cities of Sodom and Gomorrah indulged, it does appear to be the primary reason for the destruction of the cities.