“So I’m a man, but when I was a baby the doctors told my parents I was a girl.

I too was once a Male trapped in a Woman’s Body…, then my mother gave Birth, and voilà, I was Born!! 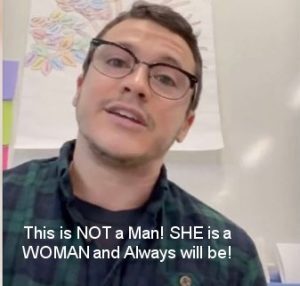 Apparently this very Confused WOMAN was NOT raised properly, and the Communist Democrat Ideology was drilled into HER mind! SHE does not know the difference between a Male and Female!

“When babies are born, the doctor looks and they make a guess on whether the baby is a boy or girl based on what they look like.”

‘Woke’ Teacher? Why in the world do they call it woke?

Take a listen to this confused WOMAN for yourself!

“Woke”…, Woke? No it is a fantasy nightmare these demon possessed perverts are living in. Satan has control of their minds! When, or IF they ever do WAKE UP, it will NOT be pretty like they think they are!!!!!!!

Jay Greenberg | Neon Nettle – A “woke” teacher has been filmed telling kindergartners that doctors “guess” the gender of babies when they are born and they are often “incorrect.”

The Boston-area charter school teacher, who spoke with kindergarten, first-grade, and second-grade students on Zoom, also told the kids that it’s “cool” to be transgender.

A recording of the video call has emerged on social media, with parents outraged at what their children are being taught.

During the “Identity Share” Zoom call, the school’s assistant principal introduces the transgender teacher, who is a biological woman (Note: SHE has a Vagina and NOT a Tallywacker) and “identifies” as a man, saying:

“I’m going to start by turning it over to you and having you share with us your ‘I am’ statements and what you like most about who you are.”

The trans teacher, Ray Skyer, then takes over the call with the young kids.

Skyer starts by telling the children: “So something that’s really cool and unique about who I am is that I am transgender. …

“When babies are born, the doctor looks and they make a guess on whether the baby is a boy or girl based on what they look like.”

Brooke Roslindale School assistant principal Sarah Hammond told the young children on the March 2021 Zoom call, “Remember: Your job during the Identity Share is to be listening really carefully so that you can learn something new about Mr. Skyer.

“We’re running a little low on time so I don’t think we’ll have questions but you can always ask questions to Mr. Skyer when you have a chance to see him later.

“So Mr. Skyer, I’m going to start by turning it over to you and having you share with us your ‘I am’ statements and what you like most about who you are.”

First-grade teacher Skyer started by stating to have three “I am” statements.

Skyer stated the first one was being a “son” and a “brother”; the second was being a reader who loves to read, and the third was being a teacher and “super-proud” of that.

Skyer then stated what was “cool” about being “Ray Skyer:”

“So something that’s really cool and unique about who I am is that I am transgender.

“So we touched a little bit about that at the beginning of this week in the book that Miss Hammond read, but I’m gonna give you my explanation about what it means to be transgender as well:

“So when babies are born, the doctor looks at them and they make a guess about whether the baby is a boy or girl based on what they look like.

“Most of the time that guess is 100% correct; there are no issues whatsoever, but sometimes the doctor is wrong; the doctor makes an incorrect guess.

“When a doctor makes a correct guess, that’s when a person is called cisgender.

“When a doctor’s guess is wrong that’s when they are transgender.

“So I’m a man, but when I was a baby the doctors told my parents I was a girl.

“And this was super, super uncomfortable for me because I knew that wasn’t right.

“The longer you wear it the itchier it gets and the only way to make the itching stop is to have everyone see and know the person that you really are.

“So when I was eighteen I told my family and my friends that I’m really a boy and it was like this huge weight had been lifted off of my shoulders and I had the freedom to be who I truly am.

“And even though this experience is super-challenging sometimes it made me the person I am and I’m super-proud to be transgender.

Whenever there are bills introduced targeting trans youth, we always hear the argument that these laws are “protecting” their peers and “preventing confusion.”

At this point, I’ve had many conversations with many young children (I’m a 1st grade teacher) about what being transgender is and never once have I been met with any fear or confusion.

I’ve even been the recipient of a group hug! Children just get it, it’s as simple as that.

This is a video from an Identity Share I did yesterday over Zoom with many of our kindergarten, 1st, and 2nd grade students.

When I opened up my classroom’s Zoom room immediately after, here are some things my students said:

“I think my family is a lot like yours!”

“How did you grow a beard?” (My answer was just that I grew up!)

“Where are you in those pictures?”

“Your brother is taller than you AND has a bigger beard!” (Thanks, friend.)

“Who is the homework leader for today??”

Learning about and embracing differences is something that comes naturally and is exciting to children. Let’s follow their lead.