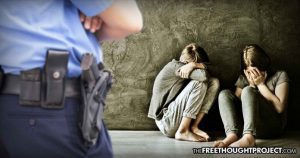 Matt Agorist | Free Thought Project – Lowell, MA — Police officers, we are told, are here to enforce the law and “protect and serve” the communities in which they work. While many of the folks who choose this career path follow through with their responsibilities, others seek out this job to use it to dominate and exploit others. Lowell police officer Kevin Garneau is one of these cops who allegedly used his power to prey on a homeless child.

On Thursday, Garneau, 49, was indicted on charges stemming from the repeated rape of a 16-year-old homeless girl, while he was on duty. Lowell Police Superintendent Kelly Richardson said he is “astonished and disappointed” with the charges.

According to reports, Garneau is a well-known bicycle cop in the area, who is a member of the Community Opioid Outreach Program.

The COOP is a collaboration between Lowell police and fire, Lowell House rehabilitation center and Trinity EMS. The group would visit recent overdose victims to help them find treatment—a noble effort indeed.

However, instead of helping victims, this Lowell cop was allegedly creating them.

According to the deputy chief of the DA’s Child Protection Unit, Thomas Brant, the victim was a homeless 16-year-old girl who Garneau was repeatedly visiting in 2016. The victim told authorities that she was repeatedly raped by Garneau on three separate incidents.

Garneau would allegedly tell the girl that she could stay out of jail if she allowed him to sexually abuse her. According to the indictment, this happened on multiple occasions.

As the Lowell Sun reports:

The victim said Garneau first visited her in a tent she lived in along railroad tracks in Lowell and forced himself on her, according to Brant.

The victim alleged two other incidents occurring in a tent and along a deserted path, Brant said.

After each incident of alleged rape, the victim reported that Garneau tossed her cash and told her to get help for addiction, Brant said during the arraignment.

Garneau, of Pelham, New Hampshire, pleaded not guilty to all charges. He denies that the incidents took place, according to attorney Robert W. Normandin, who represented Garneau Thursday.

“I am astonished and disappointed. We acted as soon as we were made aware of these allegations. This is not what the men and women of the LPD represent. They police legally, respectfully and compassionately,” Richardson said in a press conference on Thursday.

Prior to the charges, Garneau had been on paid administrative leave while the investigation was conducted, which started in January. However, now that he’s been arrested, he will be on unpaid leave.

Despite the horrific nature of the charges, Garneau was released without having to pay any bail on the condition that he wear an ankle monitor and stay away from the victim. Considering people are given bail amounts in the thousands of dollars for simple driving infractions, this can only be seen as blue privilege.

While police sexual misconduct is certainly not uncommon, police officers in positions like “community outreach” abusing their trust is especially sadistic. If the allegations are true, Garneau is one sick individual, but he is not alone.

McMullen, who was with the FDLE for five years, worked on cases with the Gulf Coast Kids House and the Santa Rosa Kids House, centers that advocate for abused children.

Like Garneau, McMullen’s position in law enforcement allowed him easy and trusted access to the children and he was able to repeatedly rape the young boys from the time they were only 7-years-old.