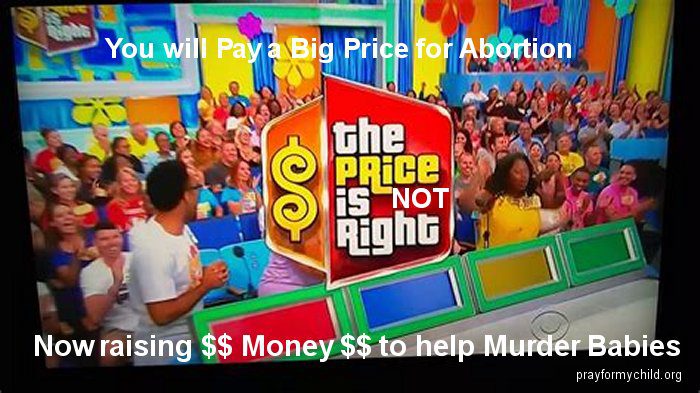 Watching it is the same as donating to them. Sponsor ads fund this and other shows. Today it is easy to know how many tune in because of cable and satellite boxes. Millions tune in each day, so in essence, if you do, you are condoning what THEY DO by watching!

The blood of millions will be on YOUR

hands unless you repent! The Bible say to abstain from ALL Evil!

1st Thessalonians 5:21-23 “Prove all things; hold fast that which is good. 22 Abstain from all appearance of evil. 23 And the very God of peace sanctify you wholly; and I pray God your whole spirit and soul and body be preserved blameless unto the coming of our Lord Jesus Christ.”

Now if you were ignorant of this and other things, the Lord will forgive you. However, if you continue now that you know the TRUTH, it IS rebellion, SIN, and is an abomination to the Lord. You will be held accountable and your name could be stricken from the Book of Life, if it is there!

The popular game show “The Price Is Right” will air a controversial show May 11 with drag queen RuPaul playing to raise money for the Planned Parenthood abortion chain.

The prime-time special “The Price Is Right at Night” with host Drew Carey will air at 8 p.m. on CBS, according to Broadway World. RuPaul will be playing to raise money for Planned Parenthood while other contestants will be competing for prizes, the report states.

Deadline reports the show was pre-recorded before the coronavirus shutdown.

RuPaul has been an abortion activist for years. In 2017, he told Marie Claire magazine that his mother used to work at Planned Parenthood, the largest abortion group in America. He organized a fundraiser for the abortion chain that year, too.

“Women in our culture have been so marginalized and so really beaten down,” he told the magazine. “We live in a masculine-dominated culture. How dare some man tell a woman what to do with her body. That is outrageous! Outrageous. As a human, that is a big issue for me that really strikes a chord.”

But Planned Parenthood does not really help women and it does not need any support. Its most recent annual report recorded 345,627 abortions and $1.6 billion in revenue.

According to a recent Heritage Foundation analysis of its annual reports since 2006, Planned Parenthood has been doing more abortions and fewer actual health services. Its cancer screenings are way down, and even its contraception numbers have been dropping steadily. These drops in services are not for a lack of funds. The abortion chain has posted record $1 billion-plus revenues in the past several years. Read more here