A Connecticut middle school has been caught teaching eighth-graders that pizza toppings are code words for sexual preferences and asking the children to list their favorite sex acts.

Once the children were taught the pizza-based code words, the eighth-graders were asked to ‘draw and color your favorite type of pizza. What’s your favorite style of pizza? Your favorite toppings? What are your pizza no-nos? Now mirror these preferences in relation to sex.’

The children were also asked to specify their “wants, desires and boundaries.”

After parents found out about the depraved coursework, the assignment was quickly scrubbed from the Enfield School District’s website, according to FOX News, and now district officials are saying the whole episode is an innocent ‘mistake.’

According to school Superintendent Christopher Drezek, the pizza-based sex material was sent to children “by accident” and the school is not part of a “secret cabal” attempting to “indoctrinate kids on something.” 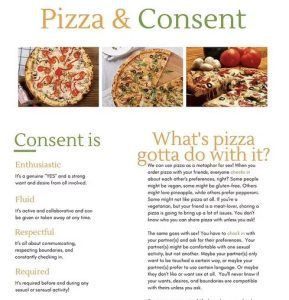 DailyMail reports: After the assignment was released in January, some parents took to social media to express their disgust with it.

One woman, only identified as ‘Amanda,’ posted a video to YouTube saying that if the Board of Education meeting on January 27 was held in-person, she would have asked: ‘Since when has it become acceptable for a teacher to ask a student what their sexual wants, desires and boundaries are?’

Others spoke out at another board meeting on Tuesday, with Jonathan Grande saying: ‘The assignment was crude, it lacked good taste,’ and Tracy Jarvis saying it ‘is prompting kids to become sexually active before their time.

‘We should not be encouraging youth to explore each other’s bodies with multiple partners in an open environment for any reason,’ she continued. ‘If somebody is doing that or asking them to do that they should tell a responsible adult, who then reports it.

‘I understand we need to teach kids boundaries,’  Jarvis said. ‘But you are giving them way more information than they are psychologically ready to handle at this ag.

‘By doing this, you open up doors for them to have partners that are older than them, increasing statutory situations,’ she claimed.

‘This has gone too far,’ she said, adding parents ‘will fight for the purity and protection of our children.’

And at the school board meeting on Tuesday, Superintendent Christopher Drezek again told parents it was ‘inadvertently’ sent out to the eighth-grad students.

‘In this particular case, I didn’t even get a chance,’ he said, ‘because the person who made the mistake jumped ahead of it before I was even notified that it had happened.’

Drezek then agreed with parents that the content was ‘inappropriate,’ but claimed there was no ‘hidden agenda.

‘There was no secret cabal to indoctrinate kids on something,’ he said. ‘They sent the wrong document. And I’m not going to perpetuate this story any longer on their behalf.