This angered me so bad when I read it, it made me nauseous! These two are spawns of Satan and will burn in a special place called Tartarus!!! 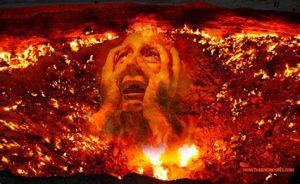 In ancient Greek mythology, Tartarus was a horrible pit of torment in the afterlife. It was lower than even Hades, the place of the dead. According to the Greeks, Tartarus was populated by ferocious monsters and the worst of criminals.

The Greek word Tartarus appears only once in the entire New Testament. 2nd Peter 2:4 says, “For if God spared not the angels that sinned, but cast them down to hell (Tartarus), and delivered them into chains of darkness, to be reserved unto judgment;”

Most English versions translate tartarus as “ Hell” or “lowest Hell.” The word Tartarus can be defined as “the deepest abyss of Hades.”

Another place in Scripture that mentions sinning angels is Genesis 6:1–4 where “the sons of God” took control of human women and their progeny. According to Jude 1:6, some angels “abandoned their proper dwelling” in the heavens. For this crime, God cast them into Tartarus where they are held “in pits of gloom” (AMP) for a later judgment. It seems that Tartarus was what the demons feared in Luke 8:31.

Peter’s mention of Tartarus is in the context of condemning false teachers. Those who secretly introduce heresy into the church will suffer a fate similar to that of the angels who sinned—they will end up in Tartarus. The Lord does not tolerate those who lead His children astray (Matthew 18:6). Source

If God condemns false preaches and teaches to the special place of torment, Tartarus, just think of what will happen to the ones who harm a child!  Matthew 18:6 – Mark 9:42 – Luke 17:2

Faux News – A disgraced Louisiana teacher has pleaded guilty to “horrific crimes” against children and admitted to serving her students cupcakes that contained sperm from her ex-husband, who is awaiting his own trial on child sex crime charges, according to authorities.

“She not only waived any right to appeal, and attempt to avoid conviction, but she also spared the victims from reliving her horrific crimes during this particular trial,” Louisiana Attorney General Jeff Landry said Monday. “Today’s conviction is in the best interest of our victims and justice.”

Cynthia Perkins was a junior high English teacher until she resigned after police raided the couple’s home. The Livingston Parish Sheriff’s Office immediately fired Dennis Perkins, who had been a special operations lieutenant.

Investigators said they received a tip from the National Center for Missing and Exploited Children about the Denham Springs couple in 2019. Police seized photographs of the couple posing nude with a child, as well as other evidence while serving a search warrant in October of that year.

Court documents reported by WBRZ in May revealed that police also found pictures of Perkins’ students eating the semen-laced cupcakes and that the couple allegedly raped a child between the ages of 9 and 10. Investigators allegedly found hidden cameras in their attic and bathroom and said they uncovered more pictures on an iPhone.

Livingston Sheriff Jason Ard said at the time that although Perkins had been a longtime officer who he considered a friend, “no one is above the law.”

“This type of alleged behavior will not be tolerated by me or anyone at the LPSO,” he said.