What the Hell is wrong with you people? And I am addressing those of you who let your children and grand children watch this network from hell!

STOP WATCHING and supporting these disciples of Satan. They are indoctrinating your children! They want to turn them Queer!

Your gonna pay Mom and Dad, and pay big time you will! 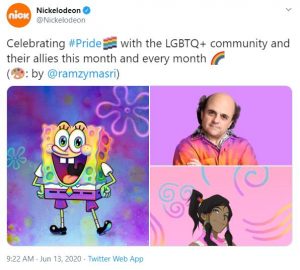 Heather Clark – Along with the Cartoon Network, Disney Channel and “Sesame Street,” the children’s television network Nickelodeon took to social media this month to recognize Pride Month, which celebrates those who identify as “gay, lesbian, bisexual or transgender.” The Bible says that children are to be raised in the “discipline and instruction of the Lord.”

“Celebrating #Pride with the LGBTQ+ community and their allies this month and every month,” it wrote on June 13, including an emoji of a rainbow flag, generating 330K likes on Twitter and 430K likes on Instagram.

The post included a graphic with a multi-colored SpongeBob SquarePants, Schwoz Schwartz of “Henry Danger” — played by Michael Cohen, who was born female but identifies as male, and Korra of “The Legend of Korra”, who was confirmed by co-creators Bryan Konietzko and Mike DiMartino in 2014 to be lesbian.

The post caused some to think that Nickelodeon is implying that SpongeBob is homosexual, although late creator Stephen Hillenburg had previously stated that he “never intended” for the character to be seen as such and that he is “almost asexual.”

Nickelodeon asked followers in other posts if they know the history behind the Pride flag and the meaning behind each stripe — with one post featuring a video including children talking about Pride Month.

Another mention featured Luna from “The Loud House” playing an electric guitar with a rainbow spotlight shining down on her. “Luna’s rocking out with Pride,” the caption read.

Nickelodeon, which became America’s first cable channel for children in the 1970’s, is known for shows such as “Paw Patrol,” “Blues Clues,” “SpongeBob SquarePants”, “The Loud House” and Tyler Perry’s “Young Dylan.”

“Our world is changing every day and it’s the courage of individuals that bring forth progress,” Cartoon Network tweeted on June 10. “While the world continues to push for equality, CN celebrates the people and families within the LGBTQ+ community, all month long and all year round. #HappyPrideMonth”

It created a “Pride Playlist” featuring episodes from the cartoons “Steven Universe” and “Craig of the Creek.” In 2018, “Steven Universe” featured episodes where the female characters Sapphire and Ruby became engaged and “married,” locking lips after being pronounced “Garnet.”

In the “Craig of the Creek” episode “The Haunted Dollhouse”, which also depicts an occultic seance, witches Courtney and Tabitha are caught kissing in the dark. The two first revealed their feelings for each other in the episode “The Curse.”

Disney Channel posted a video to social media on June 15 featuring actress Raven-Symone’, who is in a relationship with another woman, speaking about what “pride” means to her.

“We couldn’t agree more with @ravensymone — #PrideMonth is all about celebrating our authentic selves! #expressyourself,” the outlet wrote.

It also released a “Disney Pride” musical playlist on Apple Music, YouTube, Spotify and Pandora, featuring music from “High School Musical”, “Frozen”, “The Lion King”, “Aladdin”, “The Thing About Harry” and other productions.

The long-running children’s show “Sesame Street” posted about Pride Month twice so far in June, writing, “On our street, we accept all, we love all, and we respect all. Happy #PrideMonth” and “Love always wins. #PrideMonth.” The latter used the various colors of show characters, from the yellow of Big Bird, the red of Elmo and the blue of Cookie Monster to form a rainbow heart in the center.