Lamentations 2:11 “Mine eyes do fail with tears, my bowels are troubled, my liver is poured upon the earth, for the destruction of the daughter of my people; because the children and the sucklings swoon in the streets of the city.” 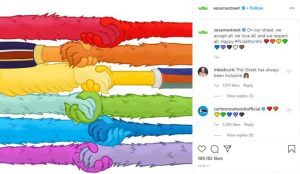 Heather Clark – The long-running children’s show “Sesame Street” has taken to social media twice in June to recognize “lesbian, gay, bisexual and transgender” Pride Month, with one graphic symbolizing the Pride flag rainbow via characters of different colors holding hands and another utilizing the likenesses of Big Bird, Ernie, Cookie Monster, Elmo and others with a rainbow heart in the center. While being applauded by many, some commenters have pointed to the Word of God, noting that it is not loving to promote sin but to rather urge others to turn from it.

“On our street, we accept all, we love all, and we respect all. Happy #PrideMonth,” the broadcast tweeted on June 11, with an emoji of the Pride flag. A graphic accompanying the tweet depicts various show characters holding hands to create a rainbow flag.

“Love always wins. #PrideMonth,” Sesame Street wrote on June 16, using the various colors of characters, from the yellow of Big Bird, the red of Elmo and the blue of Cookie Monster to form a rainbow heart in the center.

“Not an agenda that should be pushed by a children’s TV show. Children should be just children,” one commenter wrote.

“This is the opposite of love. To indoctrinate vulnerable innocent children into accepting and possibly living this abomination is to condemn them to an eternal fire. It is #demonic! God’s Word does not change,” another stated.

“Actually, God always wins. You might be loved and accepted on earth, but God didn’t create you to do whatever you want. Your sin has consequence,” a third outlined. “The loving thing I can tell you is read the Bible and obey God or face eternal consequence. Ain’t going to sugar coat it. Life vs. eternity. You decide.”

Amos 5:16 “Therefore the LORD, the God of hosts, the Lord, saith thus; Wailing shall be in all streets; and they shall say in all the highways, Alas! alas! and they shall call the husbandman to mourning, and such as are skilful of lamentation to wailing.