Sexual Deviate Teaches Kids the Colors of the Queer Flag 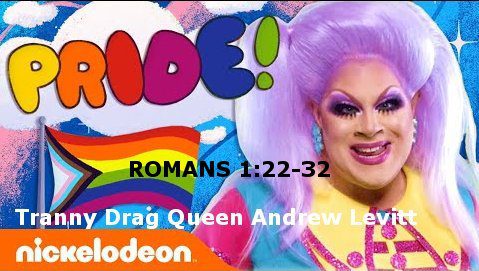 Tranny drag queen Andrew Levitt (a.k.a. Nina West) sings to children about the glories of homosexual, bisexual, asexual, pansexual, transexual, and nonbinary families. In a new video from Nickelodeon, the Pervert presents rug rats with live action video of Mr Levitt teaching them the meaning of the colors of the flag — not the American flag of course, but the flag saluted by moonbats, i.e., the flag representing the militant LGBT ideology aggressively inculcated into children by the liberal establishment.

LGBTQPXYZ militants have their reasons for targeting innocent children.

Could it have been any worse than this in Sodom or Gomorrah? Wormwood is overdue and is at hand!!

“We Might Have Some Drag Queens in Training”: PBS Children’s Show Features Dancing Drag Queen