Mark 10: 5-9 “And Jesus answered and said unto them, For the hardness of your heart he wrote you this precept. 6 But from the beginning of the creation God made them male and female. 7 For this cause shall a man leave his father and mother, and cleave to his wife; 8 And they twain shall be one flesh: so then they are no more twain, but one flesh. 9 What therefore God hath joined together, let not man put asunder.”

Not anymore! There is a Queering and Feminizing taking place on a scale never seen before!

Comment by Cynthia Pawl about the two articles below:

The very idea that forcing men and boys to wear women’s clothing, and do women’s chores is going to make them more empathetic to women, or cause them to become more like women in nature, is absolutely absurd!!

Men are men, a man’s nature is completely different than that of a woman, BY DESIGN. Women will never be men and men will never be women. The differences between men and women were designed to compliment each other and bring balance to the relationship. Each has a role to play. One is not better or greater than the other. Each partner is of equal value. God’s design works through authority. Though man is the authority in the household, he is not given the right to be a dictator. Men are meant to be submitted to GOD. When a man is submitted to GOD, he is not going to do anything that would harm or endanger ANYONE, let alone his wife whom he loves. A woman should have no problem submitting to a man who is submitted to GOD. She should feel safe, loved and protected, therefore free to love and support her husband and train and nurture her children.

When individuals are forced to perform in roles for which they were not designed, there is an abundance of stress, insecurity, resentment and tension, perhaps even anger. Though they may not even recognize the cause or even acknowledge the existence of these feelings and emotions.

Everyone has some traits of both sexes, but that is because God gives each person their own personality. It cannot be changed. True you can develop and fine tune the attributes you have been given, but you cannot conjure up ones you never had!!

All that is accomplished by forcing men and boys to dress like women and perform women’s chores… is perversion! This process will cause good, normal men and boys to develop perverted drives and thoughts. WHY? Because it invites demon spirits, who lust for perversions, to come into them. They will be driven to ever increasing levels of perversion.

And as for the men and boys who were already mean spirited, brutes, they will be mean spirited brutes with lusts for perversion.

It is ridiculous to think otherwise.

How insane is it for feminists to insist that men throw away the practice of showing respect for women by offering to open the door for them, or carry their heavy loads? How, in their convoluted thinking do they convince themselves that this is an insult and that removing this practice will help men see women as more equal to men?? Now, I don’t think that anyone needs to be put on a pedestal or worshiped for heaven’s sake. But, I see nothing wrong with men showing a reverence for the gentler nature of women. To me that goes much farther toward right treatment of women than demanding that men treat women like one of the boys. Frankly, in my humble opinion, what the feminists are demanding today is a horrible giant step downward for womankind. I frankly, enjoy when a man holds the door for me, or offers to pay for my meal. Women who don’t enjoy that, are women with either a chip on their shoulder or a demon!!

Whether you believe it or not, the reason for abuse of power and mistreatment of women is due to the evil nature of mankind without GOD. The answer to the problem is not to invite MORE EVIL, but to bring more people to faith in GOD. When men and women are in right standing with GOD, they will NOT harm others in word or deed.

The perverted articles from the Satanic, Homo loving New York Times are as follows: 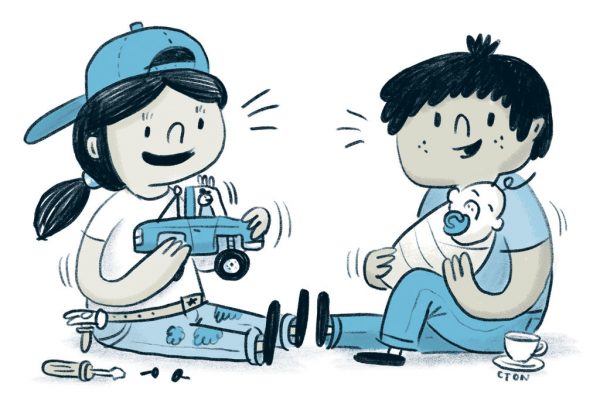 How to Raise a Feminist Son

We raise our girls to fight stereotypes and pursue their dreams, but we don’t do the same for our boys.

We’re now more likely to tell our daughters they can be anything they want to be — an astronaut and a mother, a tomboy and a girlie girl. But we don’t do the same for our sons.

Even as we’ve given girls more choices for the roles they play, boys’ worlds are still confined, social scientists say. They’re discouraged from having interests that are considered feminine. They’re told to be tough at all costs, or else to tamp down their so-called boy energy.

That’s because women’s roles can’t expand if men’s don’t, too. But it’s not just about women. Men are falling behind in school and work because we are not raising boys to succeed in the new, pink economy. Skills like cooperation, empathy and diligence — often considered to be feminine — are increasingly valued in modern-day work and school, and jobs that require these skills are the fastest-growing. See much more at Source

In the #MeToo Era, Raising Boys to Be Good Guys

The thought of my sons harassing another person is enough to keep me up at night, so I asked experts for advice.

Parenting, as I have come to understand it, is an endless series of life hacks.

My wife and I have to think creatively to stay ahead of our two sons. I’ve hidden vitamins beneath pools of ketchup, made cough-syrup ice pops, learned the hard way that toothpaste will clean marker off wood furniture while hair spray will get it out of upholstery.

But there are no shortcuts for the core mission of parenting: Raising a child to be a good person.

The thought of either of my two sons harassing or assaulting another person, or being victims themselves, is enough to keep me up at night. Any parent is likely to share my worry.

My boys are only 11 and 13, but the University of Kentucky psychologist Christia Brown says that sexual harassment isn’t a problem confined to the adult world. It begins, in fact, much earlier. “By the time girls leave middle school, the majority of them have been sexually harassed,” she told me by email.

Nor are sexual bullying and harassment confined to girls. Teenage boys are under tremendous pressure to “act like a guy,” which often means fitting into narrow (and often toxic) conventions of manhood. Dr. Brown said, “It’s common for boys to be called homophobic slurs in middle and high school, especially if they deviate from the very narrow stereotype of what it means to be a typical adolescent boy.” Some boys, in fact, might sexually harass girls simply to keep themselves from being harassed.

Recognizing that this issue can’t be summed up in a list of quick tips, I still wanted some advice. So I reached out to Peter Glick, a friend and colleague at Lawrence University, the college where I teach. He is a psychologist and an expert on sex stereotyping. See much more at source.

PJ Media – According to an article on BBC Future, women’s body parts need a makeover. Well, the names of their body parts that is. According to Leah Kaminsky, “men are all over women’s bodies.” This sounds sort of x-rated until Kaminsky clarifies: “dead, white male anatomists, that is.” Then it just sounds like some sort of obscure issue that should be dealt with in Necrophiliac’s Anonymous or somewhere. But, actually, Kaminsky is trying to make a case for changing the names of female body parts, because they were named by — and sometimes after — men.

Kaminsky points out that female body parts such as “the Pouch of Douglas, Bartholin’s glands, fallopian tubes, and that elusive Grafenberg spot” are all named after men: James Douglas, Gabriel Fallopian (sic — his name was actually Fallopius), Caspar Bartholin, and Ernst Grafenberg. Not only that, even male gods got involved in the whole name-that-female-body-part game because Hymen is the Greek god of marriage ceremonies and the hymen is the membrane covering the vagina (which is often punctured for the first time during sex which, long ago in the past, first happened on a woman’s wedding night).

Kaminsky argues that “the continued use of these mostly male eponyms not only reflects the gender bias in our medical knowledge base. It may continue to perpetuate it.” Source: PJ Media –  See the rest there.

Devvy Kidd had much to say about the Queering of the Boy Scouts back in 2013.  Today we see the result of that Queering of the BOY Scouts. Girls are now allowed in with a name change to just “Scouts”!