The sad reality is even though these will not be able to harm anymore children, there are hundreds, perhaps thousands more just like these deviates running loose!

Washington Standard – America is growing sicker and sicker by the day.

Here’s one of the sickest stories you will ever read, but please be consoled when I say that these “parents” received life sentences with no possibility for parole.

A pedophile couple who raped their two-year-old daughter and plotted to rape their unborn baby have been jailed for life. 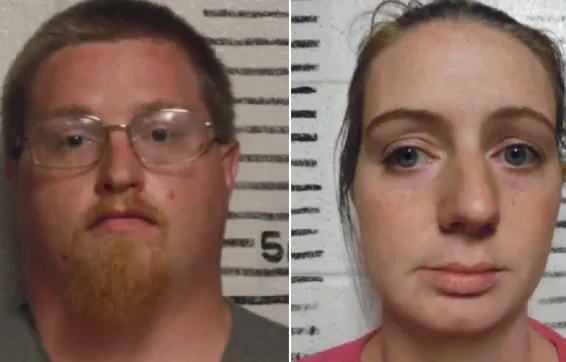 Gerrad Coddington, 25, and Christina Nelson-Coddington, 29, of Pauls Valley in Oklahoma, were handed whole life terms for sex crimes against children on Monday. They will never be given the chance to apply for parole.

The court heard how the parents handcuffed, beat and raped their 2-year-old daughter, and shared plans to do the same to their unborn baby in online messages.

Oklahoma Attorney General Mike Hunter called the Coddingtons’ crimes the worst he has ever seen.

He said: “These two individuals engaged in horrifying acts of abuse and violence with innocent children… The actions of these two individuals, with regard to the children who were subjected to these horrific acts, unconscionable, unforgivable.”

Hunter added: “These are evil people who presented a danger to society. I commend Judge Edwards’ decision to hold them accountable to the fullest extent of the law. I applaud the investigators with the National Center for Missing and Exploited Children, the investigator in my office with the Internet Crimes Against Children Task Force and the attorneys who worked on this case to achieve a successful result.”

The couple were arrested in June this year after sharing some of the vile images on Facebook. They were spotted by moderators, who tipped off FBI investigators, News9 reported. Bureau specialists then homed in on the couple, and uncovered more than 6,000 pages of incriminating communications between them.

RELATED:  Why Is The United States Being Hit By So Many Fires, Floods And Earthquakes?

Stories like this tend to not make the front page news, but they should.

Here are some pedophile stories from recent days:

Those stories are just from the past 7-10 days.

Pedophilia is a big problem and I plan to keep exposing it.

You could help me by sharing articles like this one.

As for The Coddingtons, they will probably know what it’s like to play the victim of sex abuse in prison.

Let’s pray for the 2 year-old and unborn child that they will experience a good life without being toys of their sick birth parents.