These people are nothing more than Demon Possessed!

Also see  Feminists Hate and Destroy Everything Including Themselves!   Feminism is a SIN Plague just like Leprosy! 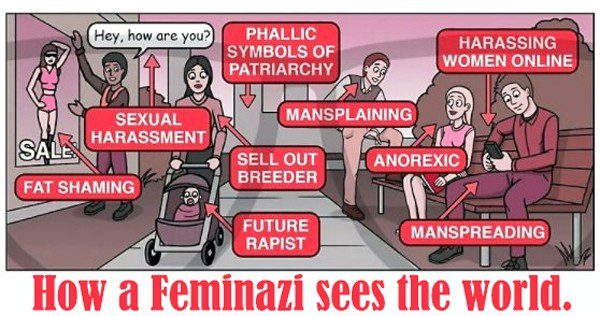 Daily Wire – An Ohio mother suffocated her three young sons to death over the course of two years and told police she did it because she worried the boys would grow up to abuse women.

Brittany Renee Pilkington, 27, was sentenced to 37 years in prison after pleading guilty on Tuesday to the murders, The Daily Mail reported. She will serve seven years for an involuntary manslaughter charge and 15 years to life for each of the two murder charges.

The first son she killed was an infant named Niall in July 2014. She then killed four-year-old Gavin in April 2015. Three-month-old Noah was smothered in August 2015. She confessed to what she had done when Noah was found.

In a taped confession, Pilkington told police she was depressed and feared her sons would one day abuse women.

Listen to this Bimbo who wants all men killed

Her husband, 47-year-old Joseph, pleaded guilty “to a misdemeanor charge of sexual imposition for having sex with her before they were married, when she was underage,” the Mail reported. Joseph had originally been charged with sexual battery because he started his “relationship” with Brittany when she was 17 and impregnating her at that time. Joseph had previously dated Brittany’s mother and lived with the family for years when Brittany was a teenager. Joseph eventually married Brittany.

Beyond Brittany’s claim that her sons may one day grow up to be abusive toward women, prosecutors also believed she was jealous of the attention Joseph gave to their sons.

Brittany’s attorneys claimed she suffered from lead poisoning as a child and years of physical and sexual abuse. Medical tests revealed Brittany had brain damage, but it is unclear what was the cause.

“Sadly, she´s safer living a better life in jail than on the outside,” said her attorney, Kort Gatterdam. He also said his client was “irreparably damaged.”

Another of her attorneys claimed Brittany “loves and misses all of her children and grieves for them every day.”

Logan County Prosecutor Eric Stewart suggested Brittany did not deserve the death penalty because of her “mental defects.” He also signaled relief that the case – which lasted four years – is finally over.

“It’s a dramatic conclusion I think to all the work that’s been done by law enforcement, Children’s Services, the Attorney General’s office,” he said, according to The Springfield News-Sun. “But it’s also a relief to bring some closure to everybody and the community.”

The Mail reported that Brittany “initially pleaded not guilty to aggravated murder charges.” Prosecutors then ordered genetic testing for the boys to see if they were killed by a genetic disorder but found no evidence to suggest this was the case.

The state appeared to become suspicious after Brittany’s first two sons died. The last son she killed, Noah, had been removed from her care for an unspecified length of time and moved to protective custody by order of a judge, the Mail reported. At the time, police had no evidence to suggest either of the first two deaths were anything other than a tragedy. One prosecutor claimed there was no way to predict the death of the third son.