No matter what these Luciferians say, there are only 2 genders, Male and Female, Boy and Girl! 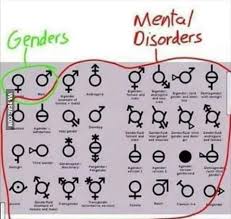 PJ Media – Last year in Canada, a first grade teacher told a 6-year-old girl that “there is no such thing as girls and boys” and that “girls are not real and boys are not real.” According to the girl’s parents, this caused their daughter a great deal of distress and amounted to discrimination against her. In fact, they filed a legal complaint against the school last week.

Teacher Janine Blouin “discriminated against NB [the anonymous girl’s initials] on the basis of sex and gender identity by using the authoritative platform of a teacher to publicly deny the existence of the female gender and biological sex, and to undermine the value of being biologically female and identifying as a female,” the complaint reads. “Neither the school nor Ms. Blouin obtained parental consent to inform their young child that her sense of self as a girl was a fiction. Ms. Blouin’s conduct undermined their daughter’s foundational concept of identity, as well as contradicted biological reality.”

When the parents complained, the teacher defended her actions, and the principal defended the teacher as well. The parents moved their daughter to a different school.

According to the parents — Jason and Pamela Buffone — Blouin discriminated against their daughter in class during a lesson on gender identity in January 2018. The teacher showed a YouTube video entitled “He, She, and They?!? — Gender: Queer Kid Stuff #2.” Among other things, the video asserts that “some people aren’t boys or girls” and that those who do not “feel like a ‘she’ or a ‘he'” might not have a gender at all.

Blouin continued gender identity lessons throughout the semester, including a whiteboard lesson on the supposed gender identity spectrum. The teacher asked each student to identify where they fit on the spectrum, and NB put herself on the furthest end of the side marked “girl.”

Then the teacher told the class that “girls are not real, and boys are not real.” This upset NB a great deal.

According to the Justice Centre, the 6-year-old girl “went home and told her parents, repeatedly asking why her identity as a girl was ‘not real.’ She stated that she was not sure if she wanted to be a mommy when she grew up, and asked if she could ‘go to the doctor’ about this issue. NB also expressed feeling that she ‘had to do something’ about the fact that she is a girl. This followed a lesson by JB on the concepts of gender spectrum and sex changes.”

In August 2018, NB told her parents she was excited about starting at a new school, where she would no longer have a teacher who said that “girls are not real.” In October, she told her mother, “This table is real, and this fan is real, and even if the fan was made out of cardboard, it’s still real.” Later that month, the distraught mother consulted with a psychologist for help in responding to NB’s concerns about her teacher’s denial of her gender identity and biological sex.

“At the age of 6, she was just figuring out that animals are divided into boys and girls; when she met a new dog on the street, for example, she would ask ‘is it a boy or a girl?'” the mother told the Christian Post’s Brandon Showalter. “So she was very confused by what her teacher was saying and was struggling to understand what it meant for her as a girl.”

Buffone warned against the corrosive effect of teaching young children that gender identity is more real than biological sex. The kind of transgender lessons her daughter received sends “the message that this mystical gender identity we’re all supposed to have is more important than our biology, and that if you don’t conform to a particular stereotype, then you are literally the opposite sex.”

“So women’s rights are being redefined away from female rights to the rights of people who identify as a stereotype,” the mother lamented. “It’s a terrible message to be sending to girls or anyone, because it undermines the value and dignity we have as humans by separating what it means to be human from our biological reality.”

The lawsuit asks the court to order: “that the [school board] ensure that classroom instruction not devalue, deny, or undermine in any way the female sex and/or gender identity”; that the board notify parents and provide teaching materials before lessons on gender identity; that the board “cease and desist from teaching gender theory in any manner which suggests that sex categories of male and female do not exist, or are fluid, or exist on a spectrum”; and that the court award $5,000 (Canadian) in damages.

Psychology professor Jordan Peterson weighed in on the case. “I can barely envision a pedagogical strategy less conducive to stable early childhood development, particularly for a thoughtful child, which is exactly what “N” seems to be — much to her detriment, in this situation,” he wrote.

Consider this: At the tender age of six, “N” was being required, first, to question an identity she had spent continual and effortful time developing since (at minimum) the age of two — learning the rules she understood to be generically appropriate for her role, so that she knew how to fit in, play her part, get along, refrain from violating the expectations of her peers and the adults she interacted with, and planning, as best as she could, her course through life as a female. Second, she was being required to question what constitutes “real” — because if you are six, and you’re a girl, and you know it (and so does everyone else), and you are now being told that none of that is “real,” then the whole idea of reality becomes shaky and unstable. The seriousness of the philosophical and psychological confusion that such demands are capable of generating should not be underestimated.

Jordan Peterson rightly warned against C-16, an act to add “gender identity” and “gender expression” categories to Canada’s nationwide ban on discrimination. He opposed the measure because it would result in restrictions on free speech. Yet in this case, the Buffones are suing under the amended law, claiming that the teacher and the school discriminated against their daughter on the basis of her gender identity. If such discrimination is prohibited, the protection should go both ways.

This horrifying case should underscore a few important lessons. First, children at the tender age of six cannot make weighty decisions about their gender roles in society and should be allowed to naturally develop according to their biological sex. In fact, children at such ages are still learning what it means to be a boy or a girl in the first place — and they need certainty, not confusion.

Perhaps more importantly, schools should not teach such radical and confusing ideologies as transgender identity without at the very least notifying parents and allowing them to opt out of the lessons. Transgender ideology can cause real harm to children.

Americans should not content themselves with the idea that this is a uniquely Canadian problem. In August 2017, a nationally-ranked K-12 school in Minnesota adopted a policy stating that not only will parents not be allowed to “opt out” of having their children taught transgender ideology in kindergarten, but they will not even be notified about the teaching.

Activists claim that such lessons are necessary to prevent bullying, but as poor 6-year-old NB demonstrates, the lessons themselves are a horrific form of mental and psychological bullying to children.

Canada has become a key battleground in the transgender wars. Twitter permanently banned feminist journalist Meghan Murphy for exposing “transgender” provocateur Jessica Yaniv, a biological male who tried to force estheticians to wax his genitals. Thankfully, Yaniv lost his case. The Justice Center represented the estheticians in the case.

The Buffones and the Justice Centre are right to fight back against the transgender lessons that scarred their daughter.